Finding Freedom and Happiness Through Unschooling with Jae Williams 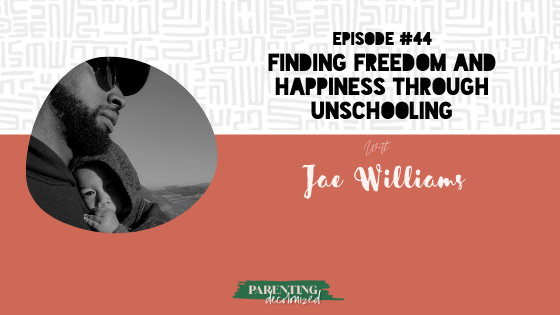 Episode 44: Finding Freedom and Happiness Through Unschooling with Jae Williams

Do you ever wonder: What is going on with my child(ren) at school? Are they truly thriving or just scraping by? Is homeschooling the best option for us?

In this episode, Jae Williams and I talk about the flaws of the traditional education system and how unschooling attempts to counter those flaws. Jae highlights his experience growing up in a traditional classroom and why he chose to unschool himself and his two young kids. Plus, we share lots of tips and advice for parents, especially black dads, on being a conscious parent, pursuing unschooling/homeschooling, and helping kids who are struggling in school.

Jae Williams is a former teacher and the creator of the BlackDad YouTube channel where he chronicles his unschooling (relaxed homeschooling) journey with his kids.

As a black child in a classroom with a white majority, school was difficult for Jae. After being switched to a school where the majority was black, he still struggled because he didn’t know who he was. He craved attention, wanted to feel special, and wanted to feel important. So, he became the class clown… which, as you can imagine, didn’t help his cause.

When he became a teacher, Jae always said that he wanted to be the teacher and the coach that he never had. He wanted to become a perfect teacher for young Jae Williams. The #1 thing that made that a reality was giving students a sense of ownership, self-worth, and opportunity to express that ownership and self-worth.

Jae discovered that the best way to learn is to be curious about something and to have a desire to understand it.

Advice for Parents Whose Children are Struggling in School:

Advice for Parents Who Want to Pursue Unschooling/Homeschooling:

Why did Jae leave his teaching job to unschool his kids at home?

After recognizing his inability to “fix” our flawed American education system from the inside out, Jae channeled his energy into unschooling, or “relaxed homeschooling”. At first, he didn’t want to unschool his children, but it was the broken state of education that drove him to make that switch. “I don’t think it works for any kid, in actuality, when you really think about it. Even those high achievers, those honor roll students,” Jae says, “The core issue is the lack of ownership… but it’s also very stifling, it’s super restrictive.”

“There’s one thing that I realized that I always wanted… someone to listen to me. And I feel that I chose to unschool because the foundation of unschooling is listening to the child,” he says.

Tips for Black Dads on Being a More Conscious Person and Parent:

Contrary to what we’ve been told, children are the most marginalized population in this country. Adult supremacy needs to be dismantled so that we can build up our children to become the next powerful, compassionate, wise, and loving generation.

See your child(ren)’s humanity. Listen to them. Help them trust themselves and their ideas.

Ready to start unschooling yourself and child(ren)? Listen in to this powerful discussion to learn more!

For 6 years, Jae served as a middle school history teacher. He piloted innovative approaches, leveraging technology to enhance the curriculum. He later provided training to other teachers as the subject matter expert in maximizing the school’s use of technology within the curriculum.

Jae pioneered the first annual History Exhibition Night to showcase students’ work for the National History Fair competition which enabled the students to display their hard work and dedication captured in their award-winning documentaries, performances, websites, research papers, and exhibits. He was peer-nominated as a Teacher of the Year finalist for 3 consecutive years. More importantly, he was considered the “go-to” teacher for many of his students, and even students he had never taught, for guidance, to lend a listening ear, or to crack some jokes.

In June of 2021, Jae took the leap to quit the teaching job he loved to homeschool his two young children after recognizing his inability to “fix” our flawed American education system from the inside out. Jae chose to take a deep dive by unschooling (relaxed homeschooling) and chronicling his unschooling journey on YouTube by starting the BlackDad channel.

To connect further with Jae: